How Did We Get Our Name? 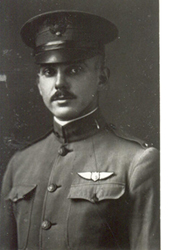 Second Lieutenant Topliff Olin Paine (1893-1922), for whom Paine Field was named, was born in Oswell, Ohio. He and his family moved to Everett in 1903, where he was graduated from Everett High School in 1911. His boyhood Everett residence was a two-story house located at 2020 Wetmore Avenue (still standing today).

Lt. Paine attended the University of Washington from 1912 to 1914, where he majored in Civil Engineering and was a member of Beta Theta Pi fraternity.

In 1914, he worked for the U.S. Forest Service, becoming a U.S. Forest Ranger in 1915. He was on duty with the Forest Service in 1917 when the United States entered World War I. He enlisted with the 12th Company of the Army Infantry in Everett.

From his enlistment in 1917 to March, 1918, he attended ground schools of the Army. Following flying training at March Field, California, he received his commission as a second lieutenant in May, 1918.

After his discharge in 1919 from the Army Air Corps, Topliff Paine became a pilot for commercial concerns in California and Mexico.

In 1920, he was appointed as a pilot with the then experimental Air Mail Service. Before his death in 1922, he was considered one of the top fliers for the Western Division of the Air Mail Service.

Topliff Paine had many narrow escapes from death while flying the early aircraft of the Air Mail Service, and, on several occasions, he landed his plane where it was thought impossible. He received nationwide recognition for many of his feats while flying the treacherous Rock Springs, WY, to Salt Lake City, UT, airmail route, which he inaugurated. You can read an interesting article at the Smithsonian's National Postal Museum's website concerning Topliff Paine's experience with the Air Mail Service. In the article, his field manager is quoted as saying, " [He] encountered heavy snowstorm which frosted his goggles and for over a minute he was flying blind. Landed at Salt Lake City nearly exhausted on account of nervous strain. He is the only pilot to make this treacherous run over the Rocky Mountains in such impossible weather."

In April of 1941, the Earl Faulkner Post of the American Legion in Everett suggested the field be renamed in honor of Second Lieutenant Paine.