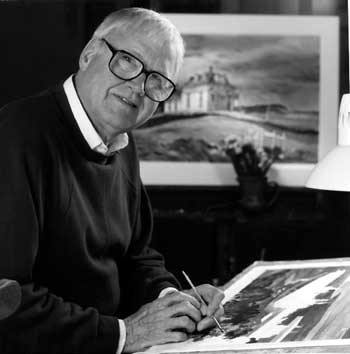 Growing up in Everett, Bernie Webber witnessed this region’s development and his watercolor paintings tell the story. Whether it’s a visual record of everyday life nearly a century ago or what’s happening now, his art is a fascinating window on the past, present, and future of our county created by one of its most beloved artists.

For decades, Bernie worked as a commercial artist in downtown Everett. He drew for the Snohomish County PUD annual reports and Associated Sand and Gravel. He also did work for the Port of Everett, which led him to work for the Navy. He actually did the first drawings of the naval base, a near exact replica of what was finally built, except for the straightening of his curved road. Companies also commissioned paintings from which prints were made to sell or offer as corporate gifts. One painting was even featured on a bank credit card.

Then, around 1993, Bernie began operating a fine arts studio, the ultimate dream of every commercial artist. Since then, Bernie said, “I’ve done so many things I can’t even remember them all.” Corporate contacts, as well as contacts made while working with organizations like United Way, YMCA, and Rotary insured him countless clients and spared him from the need to be his own salesman. Many of his paintings have traveled to the East Coast and around the world as corporations open new offices.

As a graduate of the Art Center School of Design in Los Angeles, Webber learned the precise mechanics of art. And, as a life member of the Puget Sound Group of Northwest Painters, he continued to experiment with watercolor techniques, often painting big washes of sky in unusual colors against rugged seascapes or rural landscapes. “When I do skies, I try to make each one different.” Applications, whether loose or precise, are done with Royal Academy colors - excluding white. “The white is the white of the paper,” he says. 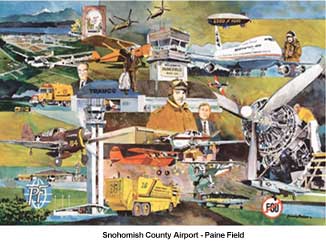 His watercolors stir and instill memories. Whether it is an aerial view of Everett’s Boeing plant unveiling and test flights of the first 747, or the innocence and calm of a farm house nestled deep in the woods, he effectively captures the essence and beauty of the Northwest, symbolizing some of the obvious reasons we are one of the fastest growing parts of the country.

As Snohomish County has continued to grow and change, much of what is gone lives on in Bernie’s murals and paintings. These can be seen in area schools and hospitals and on nearly every surface of Everett, from the Snohomish County Courthouse to the Naval Station. And Bernie was happy to continue painting them.

Bernie Webber endeared himself as a true Everett treasure. He was named Artist of the Year in 2004 by the Arts Council of Snohomish County. Most recently, a new scholarship in his honor, the Bernie Webber Scholarship Endowment Fund, was established by the Rotary Club of Everett, of which Webber was a member for 53 years. The scholarship will be offered to students who plan to pursue a career in art.