Just months after getting global attention as one of the nicest places to catch a flight, Paine Field/Snohomish County Airport is being recognized for environmental excellence.

Paine Field on Sept. 12, 2019 became the third airport in North America to be certified Salmon-Safe for its long-running efforts to maintain water quality and natural habitat that supports the biological needs of salmon.

That means environmental practices at the Snohomish County-owned airport – the community’s economic engine with about 65,000 jobs and an estimated $20 billion in annual financial impact – have been judged to be helping protect and preserve the health of Puget Sound. The determination was reached by an independent panel of regional experts who have extensive experience in the areas of stormwater management, fish biology, habitat conservation, integrated pest management and landscape management.

"Integral part of what we do."

Paine Field joins Seattle-Tacoma International and Vancouver (British Columbia) International airports in Salmon-Safe certification. Other places that have earned the designation include the City of Shoreline, the University of Washington, Seattle Children’s Hospital and properties owned by iconic Northwest companies such as Nike, Vulcan and REI Co-Op.

The county began pursuing Salmon-Safe certification in November 2017 as one aspect of the airport’s Dream Greener program. At the heart of Dream Greener is the belief that it’s possible to have it both ways: a clean environment and a dynamic Paine Field that continues to generate jobs for the region.

Salmon-Safe is an Oregon-based nonprofit that aims to “transform land management practices so Pacific salmon can thrive in West Coast watersheds.” It conditionally approved Paine Field’s certification in March 2019 after site visits and negotiations. The airport’s environmental programs already were strong, but staff also pledged to enhance airport operations in several ways. Among other things, Paine Field will increase the locations where it already contracts for independent water quality testing, and also has pledged to eliminate use of pesticides on Salmon-Safe's high-hazard list, even though those remain legal.

“Environmental stewardship is an integral part of what we do,” Paine Field Airport Director Arif Ghouse said. “There are always regulatory requirements that we have to meet but our philosophy is to go above and beyond that after balancing our operational and financial needs as well.”

Paine Field is roughly 1,250 acres, of which 519 are covered by ramps, runways, roads, buildings and other impervious surfaces. The airport is located at the headwaters of four drainage basins. Japanese Gulch, Big Gulch and Smugglers Gulch flow to the north and west. Some rain falling on the airport’s south end flows into Swamp Creek, which connects with Lake Washington in King County. All of the runoff at the airport eventually reaches Puget Sound.

Salmon-Safe conducted its Paine Field site inspections and policy reviews in 2018. At the time, international attention was focused on the plight of orcas in Puget Sound, and the importance of restoring salmon runs to their survival, said Salmon-Safe’s Puget Sound Manager Ellen K. Southard.

“Healthy fisheries are not only critical to orca survival, but also the region’s economic health,” she said. “Commercial fishing in general provides over 200,000 jobs and contributes about $14 billion to Washington state’s economy. So when Paine Field invited us to get involved it really made a lot of sense, both in terms of how we could protect these natural assets that are here at Paine Field, enhance the potential for salmon restoration and also just contribute to Snohomish County’s overall economy and the state’s overall economy.”

Paine Field sits atop a bluff that rises approximately 600 vertical feet above Puget Sound. The beach below at Mukilteo is where the Treaty of Point Elliott was signed in 1855 between the United States government and Native American tribes who still call the Puget Sound region home.

The treaty’s meaning was the subject of the landmark 1974 Boldt decision, which affirmed the tribes’ rights to harvest salmon, shellfish and other natural resources in keeping with their long history. More recently, the treaty has been central to the recognition that federal, state and local governments have a shared duty to ensure fish and wildlife can thrive here -- forever.

People who work at and around the airport have long embraced the importance of taking responsibility for keeping runoff as clean as possible, said Andrew Rardin, Paine Field’s environmental and wildlife manager.

“Our maintenance department, fire department, our partners at The Boeing Company, at Aviation Technical Services, all strive to have the best water flowing downstream,” he said.

The airport maintains an extensive stormwater management system, including 800 catch basins. There also are a series of ponds, wetlands, bioswales and stormwater detention vaults as well as 14 oil/water separators and a similar number of shut-off valves or flow control weirs.

The airport for years also has been working to reduce oil drips in parking lots on its property and has taken steps to eliminate zinc from stormwater runoff. Testing from a 2016 project that treated runoff from hangar roofs showed 99 percent reduction of zinc. 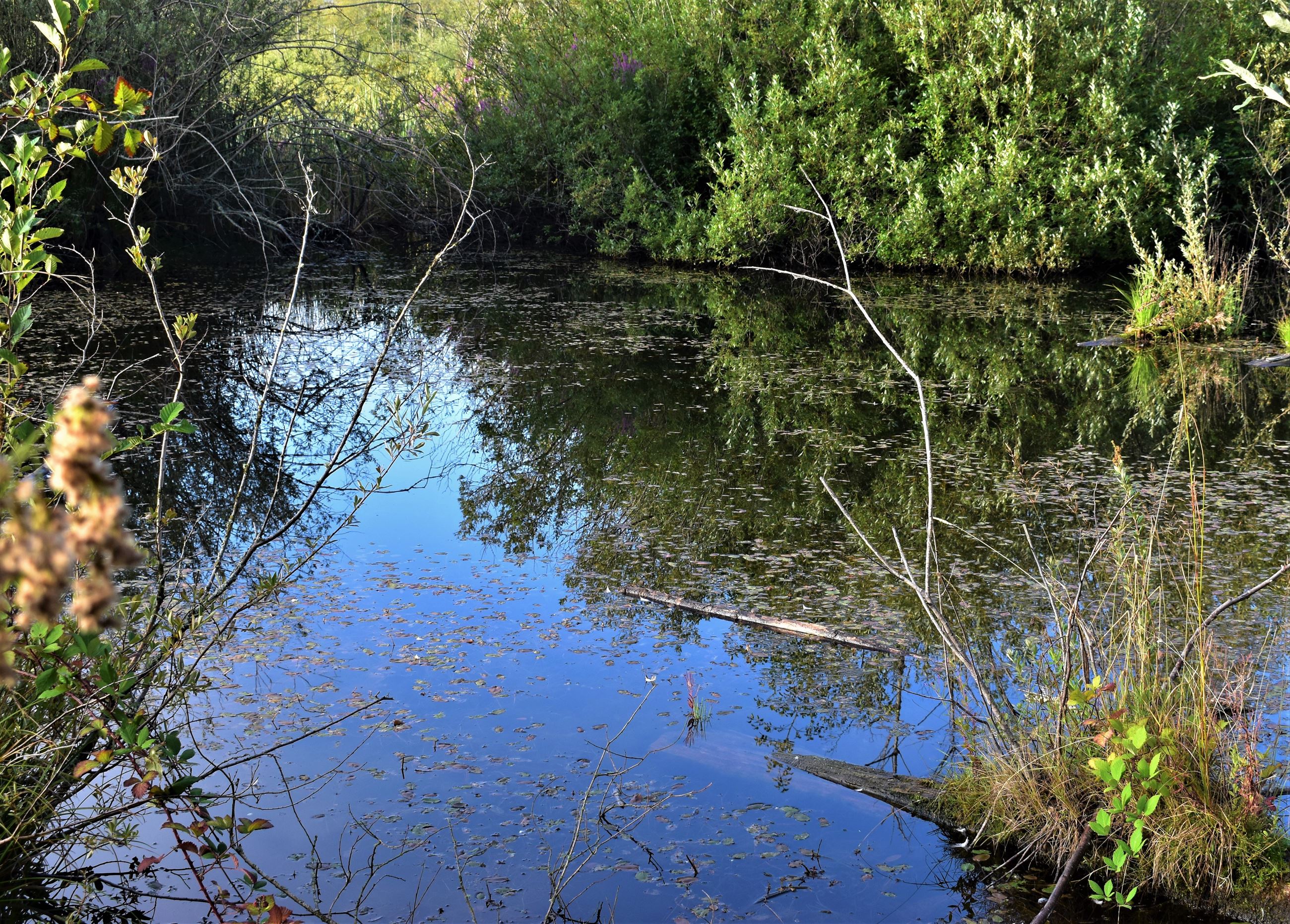 In documents explaining its decision to recognize Paine Field, Salmon-Safe took note of the airport’s long and diverse commitment to sound practices for managing vegetation, land and water. High on that list is Paine Field’s creation of the Narbeck Wetland Sanctuary in the 1990s -- Washington’s first wetland mitigation bank.

Bill Lewallen was the deputy director at Paine Field who spearheaded the Narbeck project. Now retired, he said the airport at the time found itself needing to make safety upgrades along the main runway. Without the work, the runway wouldn’t have met Federal Aviation Administration standards necessary for The Boeing Co. to continue developing its widebody jet program in Everett.

“The need was definitely there. The challenge was on the environmental side,” Lewallen said.

A well-established wetland lay in the project’s path. The airport initially was rebuffed when it suggested creating wetlands nearby to offset the loss. It kept working the challenge, however, building its case. Ultimately, it not only won approval but also the trust of environmental regulators, Lewallen said.

Narbeck is now a passive-use county park, an oasis of functioning wetlands and walking paths in a heavily industrialized corner of the county. Meanwhile, similar wetland mitigation banks have become common in Washington and around the country.

“We are very lucky here at Paine Field because Snohomish County owns quite a bit of mitigation land and healthy wetlands around the airport and so certain strategies that we might not be able to implement right at the airport terminal and on the field we’re able to implement at nearby lands within the watershed,” Southard said.

Before embarking on a career in elected office, Somers spent decades working as a fisheries biologist, focused on improving Washington’s salmon runs and preserving habitat. As county executive, he launched the Puget Sound Initiative, which makes a priority out of adopting practices and programs that enhance water quality and encourage the vitality of native species. Paine Field’s Dream Greener program is a piece of the larger initiative.

The land where the airport now thrives was once forest, and rain that fell there soaked into the ground. Now, it lands on runways and ramps and hangars, Somers said.

There was a time when the airport’s runoff headed toward the Sound untreated, but decades of investment by the county in water quality improvements and management strategies has brought about a better way of conducting business.

“And now, with the Salmon-Safe certification, we’re ensuring that all that water is treated and clean and salmon safe,” Somers said. “So that’s a huge accomplishment to have our major economic engine and wonderful facility also be environmentally sustainable and safe for the salmon.”